If you have ever been fortunate enough to have a Siberian husky in your life, you realize that they are very unique creatures. Most people know them because of their icy blue eyes and thick fur but there is a lot more going on in the background than most people realize.

For one mother of two Siberian Huskies, Luna and Blu, she is all too aware of how vocal they are.

“Siberian Huskies are vocal. They rarely bark but will whine, or moan, and also chirp and howl. Head held high, they will produce one of the most haunting song-like sounds,” reads Rescue Every Dog’s website. “Now this Siberian song fest may be music to the ears of a Siberian and the Siberian Husky fancier, but the neighborhood may not agree.”

Blu’s mother realizes that the dogs have a lot to say but sometimes, they will also use their voices to throw an epic fit. Blu often does this when he doesn’t get his way and he lets her know it.

He is about to throw a fit and talk back to his mother when things are going his direction.

In fact, Blu is so vocal that she has a YouTube channel dedicated to him giving her a piece of his mind. He carries on so much to protest the scolding that he receives that he looks like a giant baby that just isn’t getting his way. 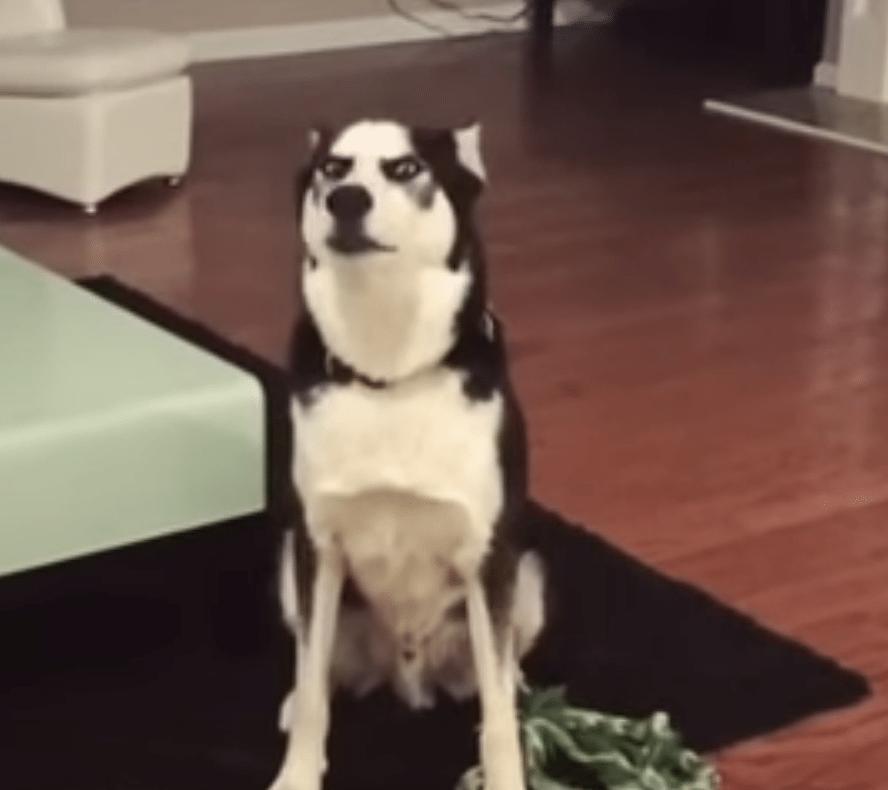 It isn’t long before a frown begins to go over his face and he is mad, but in a way that will make you fall in love with him. You just can’t help but laugh when you see how angry he looks.

Blu was left at home to entertain himself when his parents went out on a date. According to InspireMore, he was told to go to bed and that he should be a good boy. In the end, he wasn’t exactly listening to the directions he received. In fact, he decided he would rip his bed to shreds in order to defy his mother.

Rather than being sorry for what he did, he showed that it was definitely on purpose.

I’m sure that we have all seen the dog shaming pictures and videos and often, the dog has the perfect look on their face. Blu is not that dog. When he is questioned for what he did, he gives her both barrels without any regrets.

You can almost tell that he is angry and is yelling at his mother for leaving in the first place. It doesn’t matter how often she tries to get a word in, he isn’t having any of it.

He eventually quiets up but only for a moment.

“You don’t know what happened?” she asks. “Who did this? Was it you or your sister? Who made this big mess?”

That is when things take a turn for the worse.

Blu is silent for just a moment, almost as if he is contemplating what he did.

“I don’t want to put you in your crate, but I will,” she threatens.

Blu was not happy with her suggestion so he started to carry on even more.

He makes so many facial expressions and I’m sure that you will have your favorite. Because of his antics, he has captured the attention of thousands of people and has over 50,000 followers on Instagram. Thousands of people also enjoy his YouTube videos.

“Oh my goodness. Blu is making me laugh so much… he is clearly telling you that the bed exploded right in front of his eyes.. lol.,” one YouTuber wrote.

Take a look at the video and you will see why so many people love it: